Last weekend was the Canadian TKD Championships and they were extremely stressful! Not only was this the Nationals, but the Selections for Team Canada to go to the 2015 World Championships in Italy. Only the top 2 competitors in each division qualify.

I have competed injured in past competitions and that is just part of the job.  However, I had been nursing a foot injury for the last couple months. Then  to add to it, 10 days before I was to catch a flight to Regina to compete I bent over and felt an unbelievable pain in my Achilles area.  I had x-rays but they couldn’t see anything and I was told only an MRI could tell me how serious the injury was.  I didn’t have time for that so in total desperation I had a cortisone shot in my foot 8 days before competition.  It was the only way I was going to have even a chance of being able to compete.

Just before my flight I met with the doctor and he taped me up but since we didn’t have the MRI we couldn’t be sure how serious the injury was.  He was leaving it up to me to know how it felt. He explained all the different scenarios and risks along with them regarding me competing injured.  The shot didn’t work fully from the wide spread of injuries in the specific area, so I was still in a lot of pain. We both knew that there were risks and competing on my foot was going to be extremely painful. My biggest concern was that there was a risk 0f me doing more damage if I competed which could’ve resulted in surgery, taking  away going to Words all together. The whole situation was really stressing me out and I had no idea what to do.

I was a bit more quiet than normal on the travel to Regina since I still wasn’t sure I was even going to compete or not.  I was trying my best not to show how upset I was.  I could walk perfectly fine so it didn’t look like I was injured.  I just couldn’t extend my foot at all or do most motions that are necessary in TKD.

I had worked so hard leading up to this and had never felt better.  I had lost 23 pounds slowly so I could drop a weight division and it made such a difference in how I looked doing my patterns (I had more grace and felt faster)  and I also felt stronger, faster and lighter in sparring.

Friday morning after weigh-ins everyone went out for lunch together.  I knew I needed time alone to figure things out and just take a breath because I could already feel my anxiety rising. Even then, I still wasn’t sure what I was going to be able to do physically since up until that day I wasn’t allowed to do any training so the cortisone shot could settle and it was clear that the shot didn’t fully work!

I found a conference room where I spent some time by myself.  I started to try out a few patterns and I started to feel excited because I could do all the stances and I felt strong and fast. I felt great; but the only problem was that when I eased slowly into a kick, I could feel the extreme pain and ripping sensation in my foot. The whole week prior, I had done everything in my power to keep myself together and stay positive to deal with this HUGE curve ball. When I felt that pain though,  I literally threw a childish ‘hissy’ fit.  I completely broke down and got really frustrated and angry for the first time. I think it needed to come out. I just couldn’t understand WHY I was thrown this curve ball at that point, I thought I was going to have to pull out of patterns. But then once I calmed down and felt how unsettling the concept of pulling out was, I decided I wasn’t willing to let someone else take my spot on the team no matter what including the risks and the pain I was going to go through competing.  I wanted to compete in Italy more than anything and all of sudden my “switch” turned on and it was Go Time.

Recently I received a really nice email from a mom asking me to give her young daughter some advice before she competed in a TKD tournament.  She mentioned that I never looked afraid before I competed.  Trust me….this time, I was scared out of my mind.

Whenever I’ve competed before with an injury I’ve always had a game plan and strategy to make up for injury and work around it.  How can you do that with a foot injury in TKD?  I need to it kick, I need it for balance, I need it to plant so I can at least punch. I need my foot for everything!  I can work through pain, but I was afraid of the risks of this unknown injury, plus it wasn’t an aching pain, but more of a sharp pain that catches your body so I was also concerned about flinching in patterns.

After I got all my emotions out (thankfully no one saw lol) I had to come up with a strategy.  I tweaked each movement in my patterns so I could do it without hurting too much and hopefully it would be enough to win.  I also figured out what movements I was able to do and what ones I couldn’t do in sparring.

I spent a lot of time with my parents on the phone that day at home and that helped too.  This was the first tournament without them. They completely supported any decision I made even if I felt I couldn’t competed. It was an interesting experience for me, because even having their utmost support like always, I still needed to figure stuff out for myself. No one could help me make my decision. I REALLY appreciated having them there for the ups and downs the week before, because whether they were there or not in Regina….I knew they supported me and at the end of the day I needed to figure out how I was going to step into the ring with even an ounce of confidence.

I felt a huge amount of support from friends back home too and even amongst the other competitors.  So many people were sending me good luck messages and I knew they were wearing my pink ‘believe’ hoodies.   I didn’t want to let myself down, and I also didn’t want to let anyone else down after they’ve been part of my journey. Thank you to EVERYONE that supported me.

After gaining my composure I went and spent some time with my Instructor/Coach Mr. Legrow.  He had complete faith in me and that really helped.

During my first pattern, my foot was absolutely killing me and it was really hard not to show the pain on my face right in front of the judges.  I had to hold back on my movements and power since my bodies warning signals were on and I could feel the subconscious hesitation.  Each pattern got a bit easier as my foot loosened up.  Thankfully the adrenaline kicked in.  Winning the gold in patterns was amazing and I felt so much relief to have made Team Canada again.

Saturday was sparring day and  I knew I had to play it safe.  My job was to just get enough points to win.  It wasn’t the time to show all the footwork that I’ve been working so hard on, or try any fancy moves.  I felt that my sparring was very boring but I did what I needed to do and was extremely relieved to win gold again. Thank you to Mr. Parent for coaching me while Mr. LeGrow was competing at the same time. 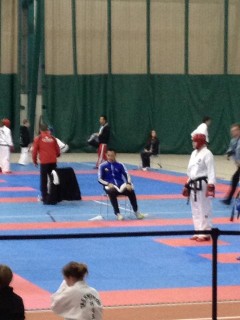 I was also chosen to be on the National Team Sparring which will be a blast. I am one of the youngest on the Women’s Team so I feel very honoured to be a part of this group of talented athletes.

I went with a mission and I accomplished it.  Now I’m just waiting for an MRI before I do too much training on it.

I also want to congratulate my Instructor Mr. Legrow for qualifying for the Individual Sparring and also for the Men’s Sparring Team. Congratulations to all the returning members and new members of Team Canada. 🙂 Let the Journey begin. 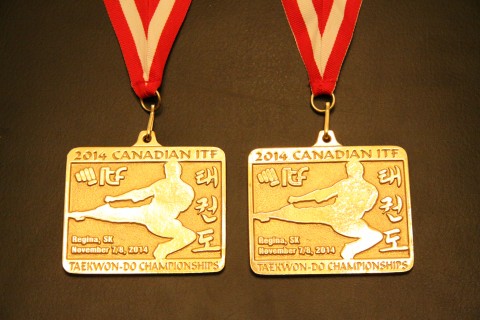