As I approach the last 4 weeks of high school I find it bitter sweet.  I am so excited for University and all the new adventures but I also feel a loss of security from my high school, friends and teachers who I’ve known for years.

Back when I was in Middle School I was on every single sports team they had and I loved every second of it.

Then while I was in high school I competed in two World Championships so I didn’t have all the time that I wanted for other sports since I was training all the time and working. I also didn’t want to risk getting injured before a huge a tournament and there is a big commitment of being on  National team..

At JMSS I only played on the basketball team, soccer team, track & field and today I played on the softball team. I am very disappointed that I didn’t have time to be on the track team this year but with TKD Canadian Eastern Championships in Nova Scotia next month I just couldn’t swing all the track practices and meets.

I’m such a competitive person and I always go out to win no matter what I’m doing.  However today was different.  I’ve never played softball before so I was surprised that the coach asked me to come out.  We only had two practices and then the one day tournament today.

Since I knew this sport was for only a one day tournament I thought it would be fun to join in – and it was a blast!  I don’t think our expectations were too high with the lack of practice that we had but we were going to do our best. I know some of the girls do play on teams outside of school and I didn’t want to let them down.

When we showed up in our team t-shirts that was all painted with Sharpe pens ourselves and I’m sure the other teams in their professional jerseys thought we were crazy.  I chose my lucky team number 23 and for my last name I said LOLE =Live Out Loud Everyday since that is how I like to live my life.

My highlight was actually getting a HOME RUN!  I was so excited hearing the crack when the ball hit the bat that I almost forgot to run but everyone was screaming and cheering. It felt great so I just kept running until I hit home plate.

It was a round robin tournament which guaranteed us 3 games.  The other teams were definitely more prepared and out of our league.  We came in a solid 6th place (out of six teams :)).  Each game we got better and better and we all really supported each other.  I miss these team bonding moments and this is a great group of girls.

When I looked around at my friends and my coach Ms. Rucsh I realized how much I’m going to miss them next year. 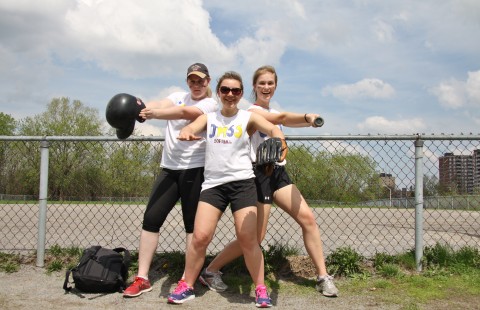 While the tournament was going  on our school was holding the “Oscar Awards”.  Basically everyone nominates people for different awards and then they vote on a winner.  I received a few text messages from friends back at the school who were attending the ceremony and I was told that I received the ‘Most Athletic Award’.  Thanks so much for everyone who nominated me and then voted for me.  Sorry I wasn’t there to get my trophy but I’ll get it tomorrow. I really do appreciate it 🙂