All the local food cupboards really needed the help from the community and it was amazing to see the turnout of MPP MacLeod’s fundraiser. Everyone brought their bags of non perishable foods or donations.  The Works Burger was extremely generous and donated free burgers on the BBQ and the local farmers cooked up corn for everyone. I think they cooked over 700 burgers last night! The place was packed 🙂

MPP MacLeod opened the evening with a powerful talk about how so many people in the community have had a hard year for various reasons and tonight was all about helping each out and celebrating some of the positive successes as well.

The community gathered enough food in the donations to feed over 300 families.  I was so impressed with Ken Ross from Ross’ Independent Grocer.  He literally brought a truck load of canned goods.  The Legion was also a huge part of the evening by setting things up and delivering all the food to the surrounding Food Cupboards.

The fundraiser was also to create more of an awareness for becoming organ donors.  Yes, I am already an organ donor! 🙂  If it wasn’t for organ donors we would not have been able to welcome home Helene Campbell from the first double lung transplant.  It literally saved her life.  It was so nice to meet her.  I was inspired how much Helene has accomplished raising the organ donor registrations through her Twitter campaign yet alone surviving her major surgery and her positive outlook on everything.  She was awarded a HUGE green ribbon for all her accomplishments.

There was always something going on during the entire night.  There was a girl named Chelsea Kisil who wrote and sang a song and she was giving all the proceeds from the sale of her CD’s to Mental Awareness and DIFD.  Being a teenager I see first how much this topic affects my peers.  Mental Illness is finally not just associated with the older generation. 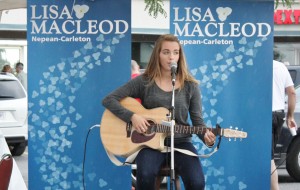 There was Zumba dancing, horses from the Carleton Raceway Track, Road Hockey Games and the Ottawa Lions Train rides for the kids.

I was honoured to be invited as a guest speaker and give a Taewkon-Do demonstration.  The community helped me so much achieve my dream of going to the World Championships.  I love having the opportunity to speak about my experience since I think it’s so important that people do dare to dream big and then work hard to achieve their goals.

It’s very difficult to give a TKD demo by yourself since you need a sparring partner.  I improvised and had a lot of fun by asking some volunteers to be my ‘kicking bag’ as I demonstrated certain skills that you learn in TKD.  I forget how much trust it takes for the volunteers to stand still and not worry about being kicked.  It’s all about control 😉 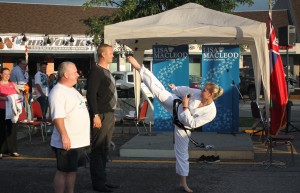 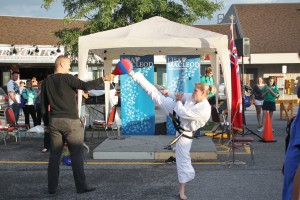 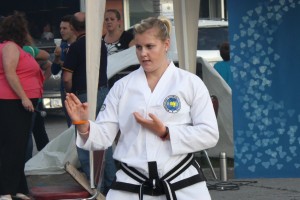 I thought I was going to be finished after give a demonstrating my 3rd degree black belt Pattern but I was so surprised how suddenly everyone wanted to do some kicking or show me all THEIR moves.  Then I had questions about how/where to take self defense courses and where I teach.  I had parents asking me to talk to their children about what it takes to get started and  I had little kids ask me for autographs and have my picture taken with me.  It was the cutest thing and I was also really impressed with the types of questions I was asked.  I never know how these demos are going to be received depending on who the crowd the is but I think MPP MacLeod and her amazing staff (especially Kayla Fernet) set the perfect stage and atmosphere for everyone just coming out to celebrate our neighbours and also to help our neighbours.  At some point in our lives, we all need a little bit of help.  Congrats everyone for making it a night to remember! 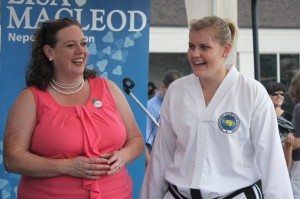 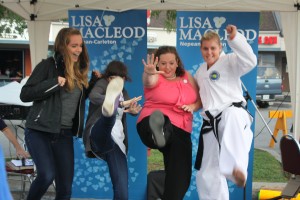