In 1982 my Uncle Doug competed in the 3rd ever Ironman Triathlon World Championships in Hawaii.  The official distances are a 2.4 mile swim, a 112 mile bike and a 26.2 mile run.  Uncle Doug was visiting from California and I spent this weekend with him. He was asking me about the my World Championship experience and then we started to talk about his Ironman experience.  He was telling me all about the differences between then and now in terms of training, equipment, coaches, and knowledge.  It’s the previous athletes that have lead the way for the new generations. 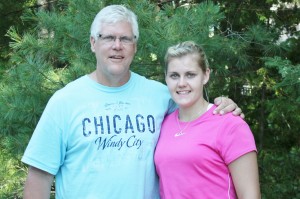 When I asked him what made him decide to do an Ironman (remember, no one really knew what they were back then) he said it was because he was tired of running marathons and wanted a bigger challenge.  Since it was such a new event there was no coaching to help with a training plan.

He recalled how all the legs and arms flailing around at the beginning of the swim in the ocean and how small the huge boat looked in the distance that they had to swim out to.  He told me how his mind was playing mind games with him during the bike portion in the extreme heat and how hard the hills were.  He told me about the food and hydration he had on the course and it’s so different compared to what athletes eat and drink now.  He ran the last whole mile with his arms above his head and he was yelling with excitement since he really had no idea at all  if he was going to be able to finish it. You could tell that even after 30 years he was right back in the moment.   He finished in 11 hours 55 minutes and finished 178th out of 900 which is more than incredible!!!!  His goal was to complete it in under 12 hours.

As we were watching the Olympics this weekend we talked about how all the technology, training, coaching, nutrition and gear has changed over the years.  It seems even more impressive that he was able to complete it with what he had (or didn’t have)  to work with.

Uncle Doug still wears his custom  ‘IRONMAN’ ring with pride.  Completing something so monumental in life changes you forever.  Looking down at the ring reminds him that he can do anything he puts his mind to.  He said whenever someone says that had a hard day at work he remembers how hard those 11 hours and 55 minutes were and everything else seems easy 🙂 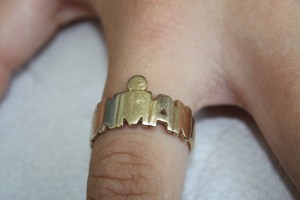 I always want to surround myself with people who have done great things so I can learn from them.  It’s cool that my mom still has this newspaper clipping from the event.

4 thoughts on “Once an Ironman, Always an Ironman!”